The Zweirad-Industrie-Verband (ZIV) (German Bicycle Industry Association) has published the latest economic data on the bicycle market in Germany: Sales of bicycles and e-bikes reached the value of EURbn 6.44 billion in 2020, an increase of 60.9% compared to 2019. At 5.04 million units, sales of bicycles and e-bikes were 16.9% higher than in the previous year, and e-bike sales already accounted for 38.7% of total sales. The jump in sales is therefore mainly due to the increase in the average sales price per bike, which was EUR 1,279 in 2020 (+39.5%) and is dominated by the high share of e-bikes. 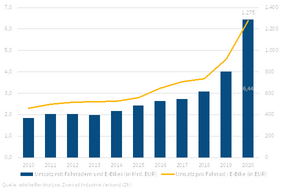 The Covid-19 pandemic dominated social and economic life in Germany and around the world in 2020 and also had a significant impact on the German bicycle and e-bike industry. The challenges for manufacturers and the bicycle trade were enormous against the backdrop of shutdowns, disrupted supply chains, shop closures, hygiene regulations, but also unprecedented demand.

The industry had already enjoyed dynamic growth in previous years. In turn, it became apparent that bicycles and e-bikes are not only extremely popular in Germany; they can be seen as a guarantor of infection-proof everyday mobility and thus relevant to the system. Two-wheelers, with and without electric drive, were and are the means of transport of the moment and were able to benefit greatly from the unprecedented situation of the past year.

The economic data of the German bicycle industry for 2020 here in brief:

High model diversity in all product categories, outstanding design, innovative further development in drive and battery technology, e.g. the integration of the battery into the bicycle frame, and significantly greater usage options are to be seen as reasons for the boom in e-bike demand.

The business models of bike leasing and bike sharing are becoming increasingly popular. In particular, tax incentives for the purchase of e-bikes for commercial (cargo bikes) and professional use are having a positive impact. Exports of bicycles and e-bikes increased by 7.9% to 1.57 million units in 2020. E-bike exports alone increased to 0.61 million units, 15% above the previous year. The ZIV estimates that the total number of bicycles (incl. e-bikes) in Germany will increase to 79.1 million units in 2020; this already includes approx. 7.1 million e-bikes (9.0%).