The Austrian kid's bicycle company woom, founded in 2013, is getting fresh money: A group of investors around the investment company Bregal Unternehmerkapital, Runtastic founder Florian Gschwandtner, entrepreneur Stefan Kalteis and other investors acquire almost one third of the company shares. woom founders Marcus Ihlenfeld and Christian Bezdeka retain the two-thirds majority of the rapidly growing company. With this strategic investment, woom intends to push ahead with internationalization and digitalization, as well as to open up new production sites in Europe. 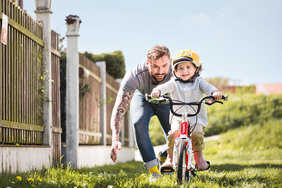 For the first time in its almost eight-year history, the Austrian kids's bicycle manufacturer woom is bringing investors on board. The aim of the minority holding: fresh capital for qualitative and sustainable growth, digitalization, internationalization and the development of new production sites in Europe. A share of around 27 percent goes to the family investor Bregal Unternehmerkapital. The remaining almost six percent are from Runtastic founder Florian Gschwandtner, entrepreneur Stefan Kalteis and the three German investors Alexander Kudlich, Ludwig Ensthaler and Florian Leibert. The two founders still hold the majority.

With the strategic participation of the investors woom wants to tackle the next development steps. "Responsibility and sustainability characterize our business activities. It is in this spirit that we have chosen our partners," explains woom managing director Guido Dohm. Family investors such as Bregal originated from entrepreneurship, in contrast to private equities, which focus on rapid profit maximization. Bregal Unternehmerkapital has a value-based investment approach and focuses on socially responsible, long-term value creation. "Family investors like Bregal have a high understanding of capital-seeking companies, as well as an extensive personal network. And of course Bregal believes in good products," Dohm continues.

Florian Gschwandtner from Runtastic explains his investment: "woom is one of the best companies in Austria for me. The potential is unbelievable. woom has what it takes to become a 'Unicorn', both in the field of digitalization and eBike," says the well-known investor.