The Idstein-based bicycle manufacturer Storck Bicycle GmbH has brought a new shareholder on board as an investor: Stefan Lohwasser is taking over 25 percent of the company from the French sports chain Decathlon S.A. and its parent company Oxylane S.A., as well as another 25 percent from the previous majority shareholder and company founder Markus Storck. 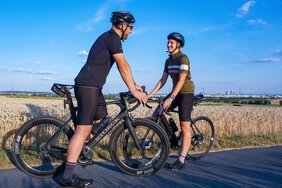 With the takeover of the two shareholder shares, Stefan Lohwasser not only wants to contribute financially to the further success of the company, but also use his experience and passion to drive the professionalisation and growth of the Idstein-based company. Lohwasser sees great potential in the company: "Storck enjoys the highest reputation in the industry. Through progressive innovation, timeless design and high quality, the Storck brand has managed to create a distinctive image for itself."

The realignment is also welcomed from the company side. "In Stefan Lohwasser, Storck has gained an active, forward-looking shareholder. Shaping the company together with him is an enrichment for the whole team. I would like to thank Decathlon for ten years of trusting cooperation and look forward to further joint successes," Markus Storck explains.

Oxylane S.A., majority shareholder of the French Decathlon Group, had already acquired a 25 percent stake in Storck in 2011. According to the company, Decathlon will remain a "strategic distribution partner" even after the exit.