British fitness operator PureGym is about to open its first three facilities in the US. This is according to its second quarter 2021 results presentation released today. The company is also expanding rapidly in its home market. 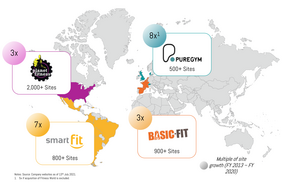 A total of three initial facilities are scheduled to open in the US in late 2021/early 2022 to explore the market there. PureGym is hoping for huge market potential in a large national market without a clear number two behind budget market leader Planet Fitness, especially with a reduced supply from potential competitors as a result of CoViD-19. To achieve this, the fitness chain is primarily relying on the strengths of its technology-based model with low labour costs.

Also by the end of 2021, the first four facilities are scheduled to open in Saudi of Arabia. In the market without relevant discount providers, which offers considerable potential, a total of 40 facilities are to be built on the basis of a franchise agreement with the Al Hokair Group.  Further master franchises in the Middle East are in the pipeline, according to the company.

In its home market, PureGym has already opened 13 facilities so far in 2021. Another 12 facilities are to follow in the second half of the year. In Switzerland and Denmark, the focus currently remains on integrating the business. Preparations are underway to rebrand the facilities from basefit.ch to PureGym.ch and a new management team has been appointed at Fitness World in Denmark. PureGym has opened one facility in each of the two markets. In both markets it is currently in the process of introducing its business model with flexible contracts without a minimum term and optimised processes.

Along with Planet Fitness, SmartFit, and Basic-Fit, PureGym considers itself one of the "Big 4" operators in the premier league which can take advantage of their growing economies of scale. In the process, all four providers have grown multiple times since 2013. RSG Group, which as the German market leader by members took over US franchise operator Gold's Gym from Corona-related insolvency last year, plays no part in this consideration by PureGym.

After the profound restrictions and closures in operations by CoViD-19, all of the group's facilities have now reopened and restrictions are increasingly being lifted. Going forward, the company is particularly hopeful of the positive impact of the higher than average vaccination rates in the UK (61% fully vaccinated) and Denmark (68%).

PureGym's financial position is stable: With total group revenue and membership in June 2021 at 99% and 91% of June 2019 levels, respectively, thanks to new openings. With adjusted EBITDA of more than GBP 8 million in June 2021, earnings are below pre-pandemic levels but still strongly positive. With total liquidity of GBP 221 million (of which GBP 76 million in cash), the company is strongly positioned.